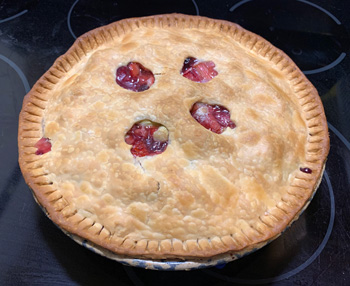 I have a lot of favorite pies. I especially love the fruit ones. I love apple, rhubarb, raspberry, blackberry, blueberry, cherry, really all of them. But there is one fruit pie that I think is a little better than all the rest: Fruit of the Forest Pie. The simple thing that makes it so good is that it combines a bunch of different fruit into a single pie.

I had it for the first time at St. Somewhere, a wonderful coffee shop that sadly no longer exists. The pie was so good that I went to the counter to ask about it. Turns out they hadn’t made it, but had purchased it from the bakery at Holy Hill, a Catholic Basilica in the Hubertus, Wisconsin. Holy Hill is a beautiful place to visit if you have the chance, and the pie is only one reason. But I wanted to see if I could save the drive and make the pie myself. As near as we could tell, it had rhubarb, berries, and peaches, though we weren’t completely sure.

I went hunting for a recipe, and discovered that the mixture of fruit used in the pie varies. Rhubarb is standard, as well as apples (which we hadn’t guessed) and various types of berries. I didn’t see peaches or cherries in any of the recipes I looked at, although they’re both a good addition. I think of this recipe as a dessert version of stew – something that cooks made in days gone using whatever they had in the pantry. It’s the job of recipes to codify the ingredients and quantities, but I’ve tried different fruit mixes, based on what was in my fridge at the time, and the different combinations have all been great. So I’ll give you a recipe, but I advise you not to follow it exactly.

Fruit of the Forest Pie

I haven’t made my own pie crusts in a long time, not since we bought a charming old house, which is nearly perfect, except for not enough counter space. And then we had a child. So I buy the Pillsbury pie crusts that you can just unfurl. To be fair, they’re no better or worse than the pie crusts I used to make, and they’re much easier. My niece makes a wonderful pie crust, the best I’ve ever had. She says lard is the secret ingredient. And I’ve seen recipes that use vodka to make the dough easier to handle. Do whatever makes you happy when it comes to a pie crust for this pie, and if you prefer a pre-made crust, I certainly won’t judge.

Note: The quantities are given as a range, depending on the size of your pie plate. I use a deep dish plate, which uses closer to 6 cups of fruit. A standard-sized pie plate uses closer to 4 cups. If you’re using the standard sized plate, you can cut back a little on the sugar, too.

Note: The dried fruit is especially helpful for soaking up excess liquid when you’re working with really fresh (meaning juicy) fruit, or fruit that you washed shortly before beginning to bake.

Add the fruit to the dry ingredients and mix well, until fruit is thoroughly coated, and very little loose sugar remains.

Turn the fruit into your pastry-lined pie plate, then cover with the top crust. Seal and flute the crust. Using a small cookie cutter or a paring knife, cut four shapes into the top crust.

Bake at 425 for 40-50 minutes. You may want to cover the edge of the crust with foil during the second half of baking, to avoid over-browning. You’ll know it’s done when the filling reaches 175 degrees, and it’s been bubbling for at least 8 minutes.

Allow 3 hours to cool and set up. Enjoy.